At last I’ve captured the elusive Red Eft in a prehistoric ramble! It was tricky business to get this rare footage as the Red Eft is known to stand completely still for many long minutes when cameras are rolling. Enjoy this rare opportunity to witness tiny feet crossing lichen covered stone!

This shifting light was a wonderful surprise and I almost missed it as I was packed up and walking to lunch when the light changed from overcast to bright. Hope you enjoy the magic as much as I do!

This one was made for Princess E because she loves pink and her personality is larger than life!

My friend Dan had a birthday last week, and his partner Kailin asked for friends to send a birthday video since he’s been in hospital for over a month and needs some cheering on. I sent the video on to Dan, but thought you might appreciate seeing the mandala.

I created this mandala with my friend, Ryan from a canoe. It’s tricky business dropping petals in the water from a canoe, but that’s part of the fun of it! This is a canoe-pan across the pond where I live in community with about 100 people.

Here’s a high speed movie of the Pink Mandala build. I like this side view because it shows the stream and play of light on the trees. Next time I’ll bring a tripod for an overhead view. Enjoy!

[I’m currently working on a short story about rescuing the fawn I call Cairn. Here are a few words that I wrote on the day of her rescue. This is a work in progress and rather rough.] 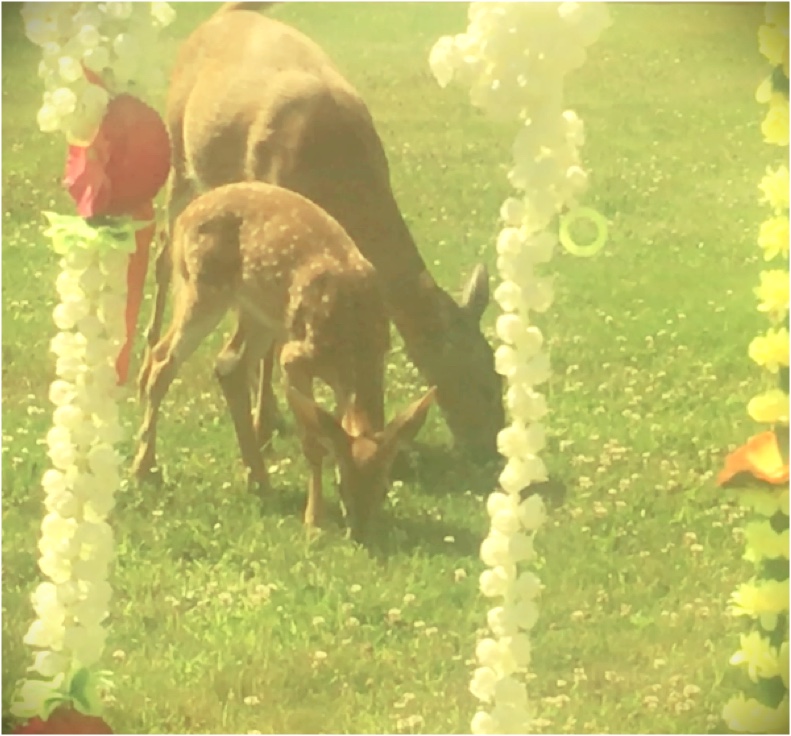 Tiny hooves dance across the chambers of my heart. Her cry for help becons me into the wild. The call of the heart, like the cry of a fawn, lost and forlorn, easily ignored and covered up with so much to do. I call her Cairn. Wedged between two boulders and crying for help, she is like all of us who get stuck between a rock and a hard place fighting like hell to get out of all that bogs us down, only to dig ourselves deeper in with each fighting breath.

I call her Cairn because she marks the way forward: a beacon of hope in a prickly forest of thorns.

I call her Cairn because her beauty is held gracefully upon four tiny hooves.

I call her Cairn because she’s a joyful reminder that the creative is found everywhere and in all living beings.

I found this red-spotted newt (Notophthalmus viridescens) hanging out by what remained of a mandala I’d built only a few days before. I love these small creatures for their fantastic color, and resemblance to dinosaurs. Easily scared into a frozen posture, it can take many minutes of sitting very calm and still to witness their tiny feet move to a prehistoric rhythm, but it’s well worth the wait. I’ll try to capture this on video to share with you sometime soon.

When we were very young, invented games like stick races kept my sister and I occupied in the outdoors for hours. The concept was simple enough: find a set of worthy sticks, capable of withstanding the rigors of mini rapids, whirlpools and submerged obstacles, launch them at the head of turmoil and the race was on! The simplicity of the game’s name belied an underlying truth: discoveries made here resonated deeply within our young bodies and, for me, sparked a lifetime of discovery, including continuing explorations in art making, yoga, educational research, teaching, and travel.

It was during the stick game that I became fascinated by the pure physicality of the stick in relation to a changing environment: the apparent stiffness of dry wood could be as graceful as a ballerina when a mid-stream rock sent it spinning in pirouettes, or simply dead weight when captured in a whirlpool’s vortex. Similar observations surfaced for me during my initial year of graduate school: stiff little twigs manipulated within a sculptural nest piece appeared fluid when placed in relation to other twigs. This discovery had a profound effect on subsequent art making, where careful observations and interactions with art materials themselves revealed a deeper understanding of the visual problem at hand. My personal art making discoveries informed a classroom research study of ways that students respond to movement-based art problems. Observations of student behavior were reminiscent of the thrill of discovery that my sister and I experienced playing in the stream. I shared these discoveries with educators at Columbia University Teachers College (2011) as well as local and national education conferences (2009, 2010). My research findings later evolved into an article published in Art Education Journal titled, “Art and Transformation: Embodied Action in a First-grade Art Class” (2012).

During the stick game, a single-pointed focus transported me away from worldly worries into a state of being present to the experience, much like the steady stream of thought just prior to deep meditation, and the flow of ideas present during creative process. In fact, I attribute many of my strengths to the study of yoga and meditation: my keen observational skills, my tendency toward self-reflection, as well as the clarity of writing my prose. I have found myself returning to the image of the stream again and again as I seek a balance between external and internal influences and thought patterns that may get stuck in a whirlpools’ vortex or flow smoothly like an unbroken stream. I have integrated my interests in yoga, art making and travel in a series of photographs of India (2005) where I documented the incredible spirit of the Garhwal Himalaya and the people who live there; a blog documenting travels to New Zealand (2013) including humorous and poignant reflections on traveling solo; a continued practice of creative writing on social media (Instagram & Twitter); as well as in my ongoing art making practice in ceramics and photography.

The process of exploration and discovery continue to resonate deeply with my interests in movement and cognition, artists and inspiration, people and the environment, and spirit and the body. It is the dynamic nature of these meetings that, for me, makes life most interesting. In future, I plan to continue exploring relationships between embodiment, cognition and the art making process in writing assignments and collaborative art projects.